Don’t be a Wheat Belly!

Quick: Name a common food, consumed every day by most people, that:

• Increases overall calorie consumption by 400 calories per day
• Affects the human brain in much the same way as morphine
• Has a greater impact on blood sugar levels than a candy bar
• Is consumed at the rate of 133 pounds per person per year
• Has been associated with increased Type 1 Diabetes
• Increases both insulin resistance and leptin resistance, conditions that lead to obesity
• Is the only common food with its own mortality rate

If you guessed sugar or high-fructose corn syrup, you’re on the right track, but, no, that’s not the correct answer.

Note that I said “modern” wheat, because I would argue that what we are being sold today in the form of whole grain bread, raisin bagels, blueberry muffins, pizza, ciabatta, bruschetta, and so on is not the same grain our grandparents grew up on. It’s not even close.

Modern wheat is the altered offspring of thousands of genetic manipulations, crude and sometimes bizarre techniques that pre-date the age of genetic modification. The result: a high-yield, 2-foot tall “semi-dwarf” plant that no more resembles the wheat consumed by our ancestors than a chimpanzee (which shares 99% of the same genes that we do) resembles a human. I trust that you can tell the difference that 1% makes.

The obvious outward differences are accompanied by biochemical differences. The gluten proteins in modern wheat, for instance, differ from the gluten proteins found in wheat as recently as 1960. This likely explains why the incidence of celiac disease, the devastating intestinal condition caused by gluten, has quadrupled in the past 40 years. Furthermore, a whole range of inflammatory diseases, from rheumatoid arthritis to inflammatory bowel disease, are also on the rise. Humans haven’t changed — but the wheat we consume has changed considerably. 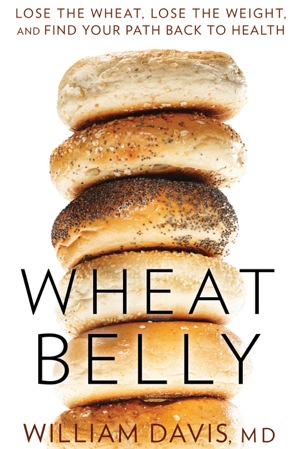 You’ve heard of “beer bellies,” the protuberant, sagging abdomen of someone who drinks beer to excess. That distinctive look is often attributed to alcohol consumption when in fact it’s just as likely to be caused by the pretzels — not just the beer — you’re downing after work. A wheat belly is a protuberant, sagging abdomen that develops when you overindulge in wheat products like crackers, breads, waffles, pancakes, breakfast cereals and pasta. Dimpled or smooth, hairy or hairless, tense or flaccid, wheat bellies come in as many shapes, colors, and sizes as there are humans. But millions of Americans have a wheat belly, and the underlying metabolic reasons for having one are all the same. Wheat contains a type of sugar called amylopectin A that raises blood sugar in an extravagant fashion. Eating just two slices of whole wheat bread, can raise blood sugar more than two tablespoons of pure sugar. This leads to the accumulation of visceral fat on the body, the deep fat encircling organs that is a hotbed of inflammatory activity. Inflammation, in turn, leads to hypertension, heart disease, cancer, and other conditions.

Wheat-consuming people are fatter than those who don’t eat wheat. Why? Among the changes introduced into this plant is a re-engineered form of the gliadin protein unique to wheat. Gliadin has been increased in quantity and changed in structure, such that it serves as a powerful appetite stimulant. When you eat wheat, you want more wheat and in fact want more of everything else — to the tune of 400 more calories per day. That’s the equivalent of 41.7 pounds per year, an overwhelming potential weight gain that accumulates inexorably despite people’s efforts to exercise longer and curtail other foods — all the while blaming themselves for their lack of discipline and watching the scale climb higher and higher, and their bellies growing bigger and bigger.

All of which leads me to conclude that over-enthusiastic wheat consumption is not only one cause of obesity in this country, it is the leading cause of the obesity and diabetes crisis in the United States. It’s a big part of the reason that reality shows like the Biggest Loser are never at a loss for contestants. It explains why modern athletes, like baseball players and golfers, are fatter than ever. Blame wheat when you are being crushed in your 2 x 2 airline seat by the 280-pound man occupying the seat next to yours.

Sure, sugary soft drinks and sedentary lifestyles add to the problem. But for the great majority of health conscious people who don’t indulge in these obvious poor choices, the principal trigger for weight gain is wheat.

And wheat consumption is about more than just weight. There are also components of modern wheat that lead to diabetes, heart disease, neurologic impairment — including dementia and incontinence — and myriad skin conditions that range from acne to gangrene — all buried in that innocent-looking bagel you had for breakfast.

Despite the potential downside of a diet so laden with wheat products, we continually bombarded with messages to eat more of this grain. The Department of Health and Human Services and the USDA, for instance, through their Dietary Guidelines for Americans, advocate a diet dominated by grains (the widest part of the Food Pyramid, the largest portion of the Food Plate). The American Dietetic Association, American Diabetes Association, American Heart Association, along with the Grain Foods Foundation, the Whole Grains Council, and assorted other agriculture and food industry trade groups all agree: Everyone should eat more healthy whole grains. This includes our children, who are being told to do such things as replace fast food with grains. These agencies were originally sidetracked by the “cut your fat and cholesterol” movement, which led to a wholesale embrace of all things carbohydrate, but especially “healthy whole grains.” Unwittingly, they were advising increased consumption of this two-foot tall creation of the geneticists, high-yield semi-dwarf wheat.

This message to eat more “healthy whole grains” has, I believe, crippled Americans, triggering a helpless cycle of satiety and hunger, stimulating appetite by 400 calories per day and substantially contributing to the epidemic of obesity and diabetes. And, oh yes, adding to the double-digit-per-year revenue growth of the diabetes drug industry, not to mention increased revenues for drugs for hypertension, cholesterol, and arthritis.

It is therefore my contention that eliminating all wheat from the diet is a good idea not just for people with gluten sensitivity; it’s a smart decision for everybody. I have experience in my heart disease prevention practice, as well as my online program for heart disease prevention and reversal, with several thousand people who have done just that and the results are nothing short of astounding. Weight loss of 30, 50, even 70 pounds or more within the first six months; reversal of diabetes and pre-diabetic conditions; relief from edema, sinus congestion, and asthma; disappearance of acid reflux, irritable bowel syndrome symptoms; increased energy, happier mood, better sleep. People feel better, look better, eat fewer calories, feel less hungry, are able to discontinue use of many medications — just by eliminating one food from their diet — ironically a food that they’ve been told to eat more of.

It is imperative that we break our reliance on wheat. It will require nothing less than an overthrow of conventional nutritional dogma. There will be battles fought to preserve the status quo; the wheat industry and its supporters will scream, yell, and claw to maintain their position, much as the tobacco industry and its lobbyists fought to maintain their hold on consumers.

If the health benefits of a wheat-free diet sound hard to believe, why not conduct your own little experiment and see for yourself: simply eliminate all things made of wheat for four weeks — no bread, bagels, pizza, pretzels, rolls, donuts, breakfast cereals, pancakes, waffles, pasta, noodles, or processed foods containing wheat (and do be careful to read labels, as food manufacturers love to slip a little wheat gliadin into your food every chance they get to stimulate your appetite). That’s a lot to cut out, true, but there’s still plenty of real, nutrient-dense foods like vegetables, fruit, nuts, cheese and dairy products, meat, fish, soy foods, legumes, oils like olive oil, avocados, even dark chocolate that you can eat in their place. If after that 4-week period you discover new mental clarity, better sleep, relief from joint pain, happier intestines, and a looser waistband, you will have your answer.